As the title suggests, there’s a bitter element to the usual sweetness on the blog today.

Last month after a series of recent strokes, I lost my grandmother. She was my last living grandparent and the one I had been closest to. Even more sadly, I hadn’t felt that closeness for some time: during the decade prior to her death she had suffered from stroke-induced dementia. In a way, a funeral in these circumstances is a delayed public farewell for the private goodbyes that we say in our hearts much earlier than the physical death. Many happy memories were shared, with special mentions going to my grandmother’s delectable club sandwiches. While I fondly remember those sammies, my sweet tooth has a special fondness for her fruit-laden jelly cheesecake slice.

I vividly remember picking out the green kiwifruit slices from the jelly of the same colour in which they were mummified, a-top that eerily white layer (I didn’t know it was condensed milk at the time!) and finger-licking crumbly biscuit base. Yep, along with those club sammies, this slice has a special place in my food memory.

Instead of green kiwis I knew I wanted to do a berry-topped slice; partly because it was a little known fact that Grandma liked the colour purple (which was the colour that the blackberry jelly packet promised), and partly because we had grown blackberries when I was young so I know she would have had some at hand when making this slice. However, it turns out that frozen blackberries aren’t easy to find if you don’t have a vine of ’em, so the closest I could find were these boysenberries.

This post was a little bit delayed because we were packing up our house over the past month and moving in with my (wonderful!) in-laws. And in truth, I’d been waiting for just right moment to make it.

Last weekend was that opportunity. I had been trying to make several different things for church morning tea but nothing was working – getting used to a different kitchen, general clumsiness and maybe my mind just wasn’t on it. But then I realised I had all the ingredients for this and I miraculously found them amidst all our boxes, so I knew it was meant to be.

I hope you have a go at this very easy recipe – the only hard bit is waiting for it to be ready! There *are* three stages but you hardly have to do anything for each one. First is a simple biscuit + melted butter base. It was my MIL’s fabulous idea to use a glass to pack the mixture into the tin – genius!! 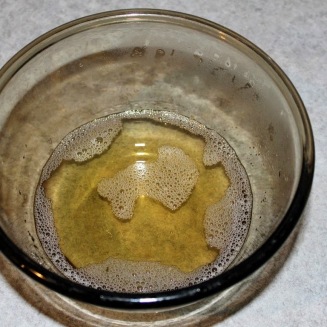 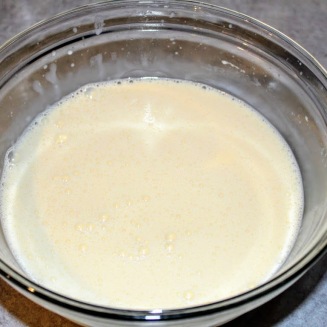 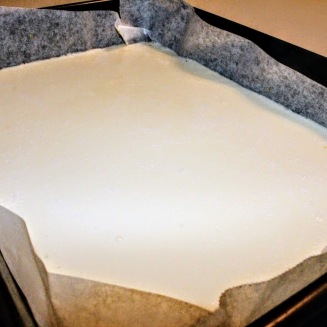 Third and finally, pour the jelly over and pop on your berries. You’ll see I used one blackberry jelly packet and one lemonade jelly packet, to dilute the purple colour so you could still see the berries dotted through it. I cut bigger berries in half so they were more submerged in the jelly. 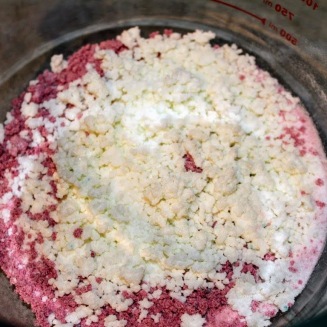 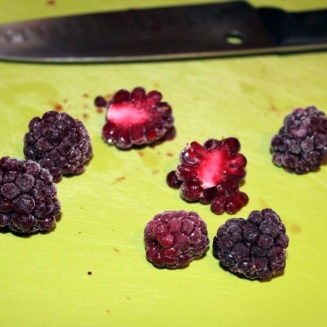 My grandmother was very tidy and organised and I’m sure she would have cut this slice up with more care than I did. I’m also sure she would have been embarrassed to think that I would share something that she made, as she was very humble and always put others ahead of herself. 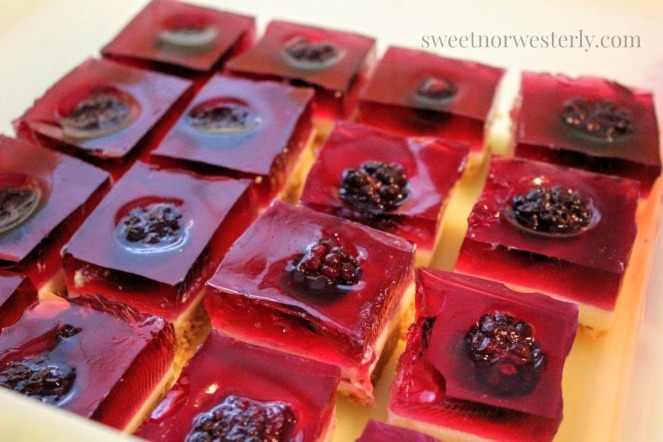 This recipe is adapted from Baker’s Corner. From the original recipe, I doubled the condensed milk and jelly layers because I was making a huuuuge tray (9″ x 13″) for a group, approx 30 servings. You could use a smaller tin (e.g. 9″ x 9″ or 8″ x 12″) and use the same base recipe as below but halve the ingredient quantities for the top two layers.

You can easily substitute berries for a different fruit, such as apricots or kiwifruit, just try to match it to the colour of your jelly! If your fruit is quite tall like my berries were, you might want to make more jelly to cover them.

Knowing that her recipe was out for the world to see might have made my Grandma feel a bit overwhelmed – but if she knew others were enjoying her efforts in some way she would be pleased indeed.

I hope you get to try this slice and remember someone in your life who has left a legacy of kindness and love like my Grandma.

We're marching into March already - but first I want to keep the summery fun of February! New blog post out now looking back at Galentines Day this year + a tutorial for decorating this buttercream beauty 💗🍰🍮link in IG bio or here: https://sweetnorwesterly.com/2018/02/28/galentines-day-2018-stripey-ombre-buttercream-cake-tutorial/
Happy Galentine's Day!!! Are you celebrating with your gal pals this week? Check out what me and mine did to mark the occasion last year (plus ombré buttercream shell cake tutorial): sweetnorwesterly.com/2017/02/16/galentines-day-3-ombre-buttercream-shell-cake-tutorial/ + link in IG bio, and stay tuned for the highlights of this year's fab event!
Beat the heat with a new twist on a classic: strawberry tiramisu 🍓🍰bonus = does not require turning on an oven! Recipe fresh up on the blog at link below and in bio xo https://sweetnorwesterly.com/2018/01/31/eating-summer-strawberry-tiramisu/
Weekend noms... so delicious they should be illegal! Baked Brie with pear compote a la @nerdswithknives via @seriouseats and smoked fish quiche topped with my own zucchini flower, recipe thanks to @fromthekitchen via @dishmagnz (p.s. LOVE her new book!!)