Spring has sprung here in Christchurch New Zealand, and with it my interest in being outside keeping the garden tidy (might have something to do with the weeds, too…). That, and having been on holiday recently, means that I’ve had a bit of a cakey-bakey hiatus. But never fear – I have many lovely cakes from earlier in the year that I haven’t had a chance to share, so it’s the perfect excuse for me to catch up on posting ’em all. Starting with not one but TWO! 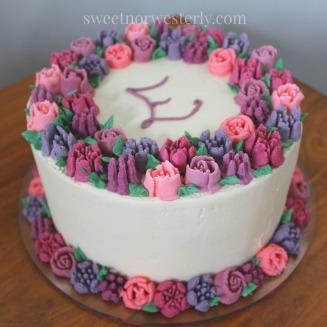 Now last year, I did something naughty. I promised to share a certain bestie’s birthday cake. And then… well… there were sooo many other cakes… it got left by the wayside.

I was a bad friend 😦

But not this year. I pledged to cakeify any planned bestie b-day event. Said bestie (E) is quite the party thrower so I had my work cut out! It may be a few months late, but here are the pics to prove that I did my best-friend-ly duty…

Given free reign on cake design, I knew I wanted to make a dessert as bright and bubbly as E is – so neon colours were a no-brainer 🙂 We settled on teal and orange with a hint of pink for a sort of watercolour effect. I wanted to experiment with chocolate bark, so into the design that went, too.

What I learnt about chocolate bark is… don’t make it in winter!!! Well, I really mean don’t pour melted chocolate onto a cold oven tray so that it sets immediately and you don’t have time to make a cool pattern or get the sprinkles to stick or cut it and it ends up really thick! Oh well, we live and learn… 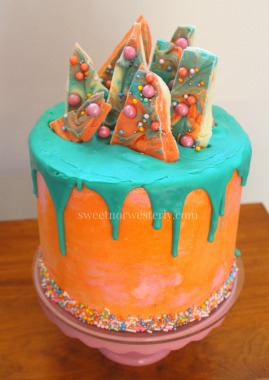 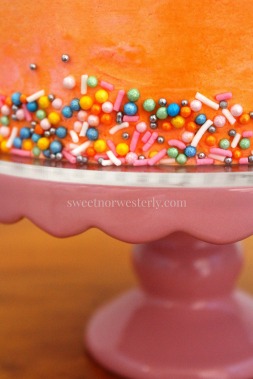 But I did have a bit of fun assembling the colour-coordinated sprinkles. And trying out a new recipe: vanilla cake with raspberry reduction and passionfruit meringue buttercream, from Kara’s Couture Cakes. I’m told it was de-licious 🙂

Here are some of my favourite snaps from assembling this neon monstrosity. As you can see the neon drips were made of coloured white chocolate ganache and the exterior buttercream was also meringue-based. 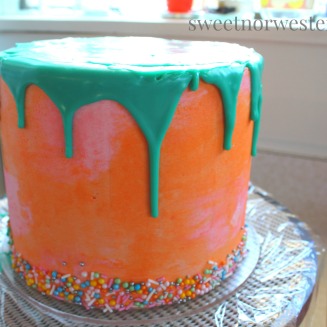 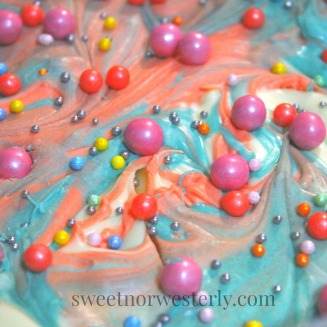 This second cake I originally had bigger plans for – involving two tiers of purple fondant frills or something of the sort… Alas, frills required more time than I had available. I hadn’t yet taken my new Russian flower-piping tips out for a spin and I was very inspired by this fabulous wreath cake from Cake Style. 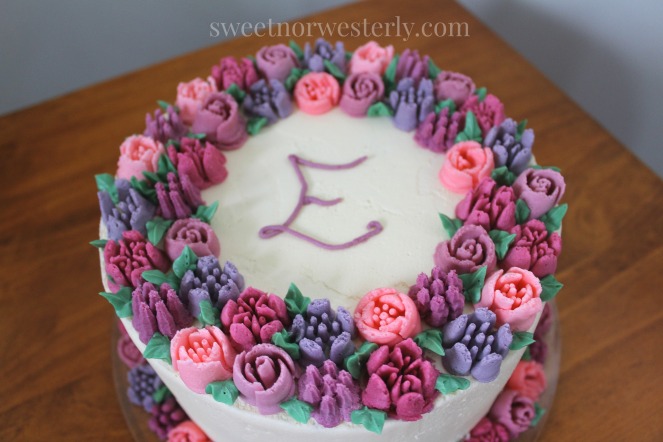 The cake flavour was chocolate (my go-to!) and the buttercream was easy American vanilla BC, except for the green leaves which I used left-over meringue buttercream to make. I loved discovering the cute shapes made by the Russian piping tips. It did take a bit of practice to get them looking their best: I found that I needed to apply firm enough pressure to adhere them to the cake/surface but ease off quickly so they didn’t get too tall! 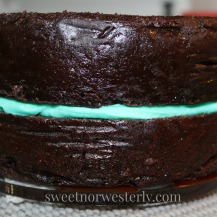 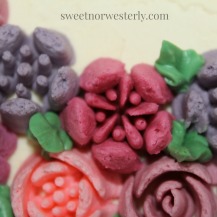 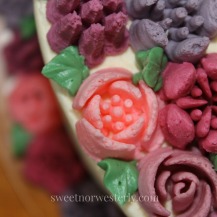 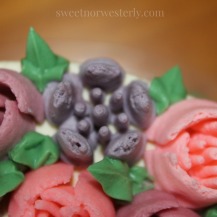 And here’s the view from the top…

I’m pleased to say that E liked both cakes and both were a good challenge for me! And now they are documented for the world to see 🙂 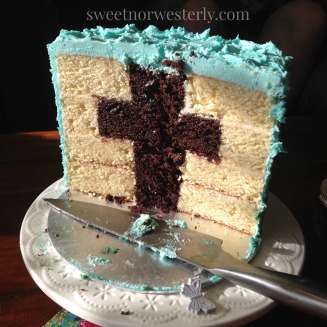