My heart is full, my feet are tired and I’m floating on a cloud! But it’s not romance (though rest assured that is alive and well!). I’m talking about Galentine’s Day, which any Parks and Recreation fan could tell you falls on February 13th every year, the day before V-Day itself.

This year I had the double good fortune of remembering G-Day WITH enough time to plan something, and (more importantly) the best bestie a girl could ask for agreed to share in the planning and co-hosting.

The plan was simple: food, fun and friendships. We invited all the special women we know – from our church as well as our other friends, family and co-workers – to a special party.

We made delicious and pretty food and drink in Valentine’s colours.

Lemonade and sugar-free herbal iced tea, each served with raspberries, were perfect for the hot afternoon of the party. Those polka dot and floral paper cups lent a festive feel when paired with some funky paper straws. And the pretty wee gal on the pink stand was a 7″ raspberry and coconut cake – free from dairy, gluten, nuts and sugar (except for the icing) – made with two times this recipe. 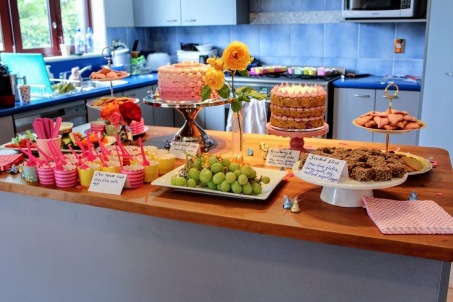 Other treats included the ombré buttercream shell cake in question, chocolate mousse cups (served with the most adorable heart spoons from The Pretty Baker), crudités with dip, E’s fantastic cheese crackers, and heart-shaped meringue cookies. Those meringues have special nostalgia for E and I, because we made these for the first time 8 years ago when we were flatmates as Valentine’s gifts for our buddies. Except…we got the oven temperature wrong: turns out 200 degrees Celsius is a lot hotter than the 200 degrees Fahrenheit in the recipe! We burned our hearts then, so we recreated them this time without the singe!

We played two female-affirming games organised and led by my lovely co-host, E. For the first, each guest was given either an author’s name or a book title and then had to find their match. All the books (bar one) had strong female characters! The other game was ‘pass the parcel to poetry’, where E read out a poem that instructed guests to pass a wrapped gift to certain people around the room, in rhyme of course! For example, the woman wearing the largest earrings, or the gal most recently married. The one holding the gift at the end of the poem got to keep the contents. 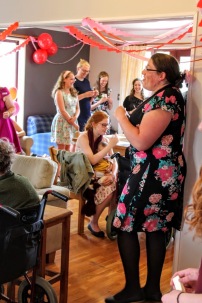 To keep the ladies busy outside of the formal games, we had a couple of crafty activities on the go. I set up a cookie decorating station: ginger cookies and gluten and dairy-free almond cookies were covered in royal icing and sprinkles in just about every shade of pink. E prepared some heart-themed origami activities that the ladies enjoyed doing on the outdoors table. And last but certainly not least, we set up a photo wall that you can see in the pic below. 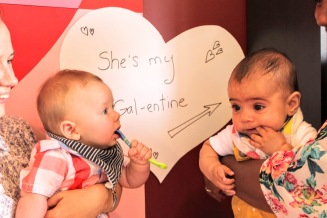 And we decorated with flowers and heart-shaped balloons and streamers.

E worked her magic with crêpe paper to make the most glorious streamers, which we complemented with cute balloons. The gorgeous roses were from the garden around the church office where we hosted the party.

Now onto the tutorial for the ombré shell cake on that delectable foods table. My cake inspiration was this cake which I believe was created by Iven Oven but variations exist all over the internet. 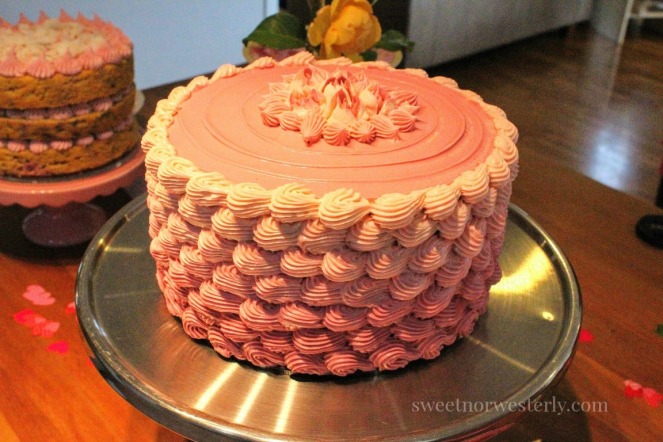 Sadly, I ran out of time to take a decent photo of it on its own! *sigh* But there were plenty progress shots as you’ll see, some taken by me and some by my camera-wielding Valentine. He has his uses 😉 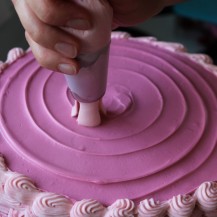 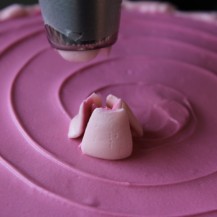