What better use for a long weekend than some time in the kitchen, baking up a storm. There are few things that make me happier! However a poorly-timed cold/flu took me down during the week so I’ve been trying not to go crazy with baking, let alone blogging about it.

(‘Poorly-timed’ because a) when is a cold ever welcome, and b) it was my BIRTHDAY, plus my parents were visiting from out of town. The cold sent my tastebuds AWOL and so I couldn’t taste much of the two birthday dinners that I had 😦 ).

…would I be an ‘irrepressible’ baker if I could be stopped?!?!? In addition I have been reminded by a certain faithful reader (my MIL 🙂 that I am overdue for a new post. I’ve been working myself up to posting about Swiss Meringue Buttercream frosting/icing, but obviously I haven’t reached the motivation threshold for that yet. So here’s a ‘filler’ til then – albeit a delicious one!

While Monday (yesterday) was a holiday in NZ known as Queen’s Birthday, I hear that those in the States are celebrating Memorial Day around about this time. The main reason I know this is because a friend of ours, an expat American married to a Kiwi lass, had his birthday party this weekend and it was M-Day themed. So we decked out in red, white and blue and I turned out these wee Red, White and Blue Berry Cupcakes.

I used Julie Le Clerc’s delicious and super-easy Vanilla Cupcakes recipe from this post, adding about a cup and a half of mixed berries to the batter just before dividing it between cupcake cases. It gave a lovely red and blue tinge to the batter. 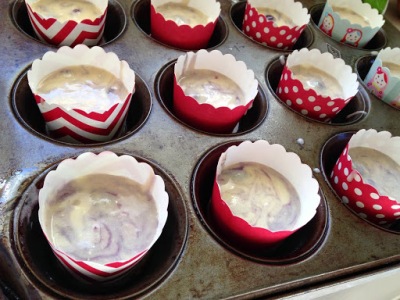 The cupcake/patty pan cases were the closest I had to red, white and blue! The ones with babuska dolls I just couldn’t say no to…

Although these cupcakes didn’t rise as much as they would have without the addition of berries, they were beautiful and moist. 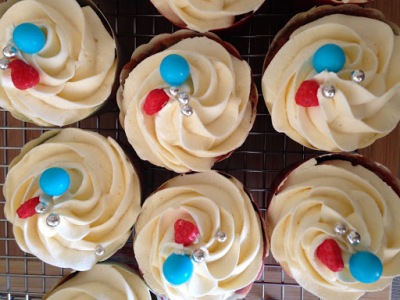 I iced them with a half-quantity of the regular buttercream (using my favourite margarine as I didn’t have any butter softened at the time) from this post by filling a piping bag attached to a size #1M Wilton (large open star) piping tip, and topped with some sweets in suitable colours 🙂

Now for her Majesty the Queen, the very best must be presented. The obvious choice (to me) was brownie. What could be more cakey than cake, more chocolatey than chocolate, more decadent than decadence itself?!? Few things in the world can make me happier than a perfectly gooey, yet fully-cooked, fudgey bite finished with a crisp top and chewy underside. I can’t imagine a heaven without brownie.

And brownie was also what I promised to make my colleagues at work for my (delayed) birthday morning tea ‘shout’. I’m hoping they’ll enjoy my efforts with these two amazing flavour combinations!

All I seem to get as gifts these days are recipe books (not that I’m complaining!), and for this birthday just gone my mum got me the fabulous Whittaker’s Passion for Chocolate recipe book. Both my sovereign-worthy brownie recipes were inspired by this fantastic publication.

NB: My conscience has recently been checked in the area of copyrighting. As a result, my general rule will be, if a recipe (that’s not my own original – ha!) isn’t available on the net/to the general populace by the author themselves, I shouldn’t be taking the credit by putting it out there. However…if someone else has already put it there…ahem, may I present, incredibly scrumptious and drool-worthy Peanut Butter Chocolate and Caramel Brownie.

The recipe is faithfully produced by those links belonging to the ‘someone else’s (not me!), but I have a few hints for making it:

Brownie Number Two: Raspberry and Dark Chocolate. I’ve heard that this recipe is the ‘best in NZ’ but I shirked the 7 eggs it takes (although it probably feeds an army – let me know if you ever try it out!). So instead I tried the NZ Women’s Weekly version (4 eggs) and it worked a treat 🙂 No shortcuts this time!


Hope you had a great long weekend and that you got some time to bake up some celebratory treats – or even to have a right royal rest!

We're marching into March already - but first I want to keep the summery fun of February! New blog post out now looking back at Galentines Day this year + a tutorial for decorating this buttercream beauty 💗🍰🍮link in IG bio or here: https://sweetnorwesterly.com/2018/02/28/galentines-day-2018-stripey-ombre-buttercream-cake-tutorial/
Happy Galentine's Day!!! Are you celebrating with your gal pals this week? Check out what me and mine did to mark the occasion last year (plus ombré buttercream shell cake tutorial): sweetnorwesterly.com/2017/02/16/galentines-day-3-ombre-buttercream-shell-cake-tutorial/ + link in IG bio, and stay tuned for the highlights of this year's fab event!
Beat the heat with a new twist on a classic: strawberry tiramisu 🍓🍰bonus = does not require turning on an oven! Recipe fresh up on the blog at link below and in bio xo https://sweetnorwesterly.com/2018/01/31/eating-summer-strawberry-tiramisu/
Weekend noms... so delicious they should be illegal! Baked Brie with pear compote a la @nerdswithknives via @seriouseats and smoked fish quiche topped with my own zucchini flower, recipe thanks to @fromthekitchen via @dishmagnz (p.s. LOVE her new book!!)