Wow!!! What a response…85 views in one day for my first post! Even if half of them are, in all likelihood, my own page views, that’s still 40 something times that you guys have considered my words worth reading. D’awww… I’m all warm inside just thinking about y’all!

Now that I know who I’m blogging for, on with the irrepressible baking!

So, cake. It would only make sense for a cake recipe to be the first posted about here. Considering all the dreaming I’ve done about cake since I first entered the kitchen – a dream that will not be repressed any longer – bring on the cake!!

This recipe I came across while searching for a way to use all three of: my new bundt cake tin (Kiwis read: ring cake tin); leftover buttermilk; AND the copious amounts of rhubarb that our plant has produced during the really rainy days  last week in Christchurch. While we benefited from the rain, my heart goes out to all those who didn’t have it as good and whose earthquake damage is compounded now by flooding.

The original recipe came from Hannah at honey & jam who took her inspiration from ‘Rustic Fruit Desserts’ by Cory Schreiber and Julie Richardson. I love the soft, spongy texture that buttermilk gives. Mine was a really yellow colour, probably because I substituted one of the eggs for two eggs yolks (meh, ya gotta use them up somehow!). I made a couple of other tweaks for my own convenience – preferring to use orange zest and juice as I had no fresh lemons.

Here’s the recipe and some ‘action’ pics I took with my iPhone camera. I have an Evil Plan – well, more like an Excellent Plan – to have great photos of the food I make for your eye-candy enjoyment. More on this later 😉

Cake2 1/2 cups all purpose flour1 teaspoon baking powder1 teaspoon salt1 cup margarine* or butter (unsalted if you can get it)1 3/4 cups white sugarzest of 1 lemon or orange3 eggs (or 2 eggs and 2 egg yolks)Juice of half a lemon or orange3/4 cup buttermilk
3 cups of rhubarb, trimmed and very thinly sliced (I like to chop up the rhubarb ahead of time and mix in with a couple of tablespoons of castor sugar, then refrigerate until needed); other seasonal fruit in the same quantity could be used – nectarines, apricots, pears; strained of juice though would be wise.

Sift the 2 1/2 cups flour, the baking powder and salt together in a bowl and whisk to combine. Using a handheld mixer with beaters or a cake mixer with the paddle attachment (K-paddle, if it’s a Kenwood), cream the butter, sugar and lemon or orange zest together on medium-high speed for 3 to 5 minutes, until light and fluffy.

Add the eggs one at a time, scraping down the sides of the bowl after each addition, then stir in the lemon or orange juice.


Stir in the flour mixture in three additions alternating with the buttermilk in two additions, beginning and ending with the flour mixture and scraping down the sides of the bowl occasionally. The batter will be very thick.
Fold [read: stir carefully with a spatula to keep the mixture aerated] about two thirds of the rhubarb into the wet mixture. Pour the batter into the prepared pan and sprinkle the remaining rhubarb on top.
Bake for 30 minutes, then rotate the pan in the oven and cook for another additional 30 to 40 minutes [shorter if you’re using a fan-forced oven], or until the cake closest to the centre springs back when lightly touched. Cool the cake in its pan on the wire rack for 30 minutes before inverting and removing the pan.

2 cups icing sugar, more as neededJuice of half a lemon or orange1 tablespoon nearly melted butter or margarine*To make the lemon/orange glaze, whisk the icing sugar, lemon or orange juice and butter or margarine together. The mixture should be thin enough to pour but thick enough to cling to the crumb and not to pool all around the cake. I had to add water to get it thin enough, however if yours is over-thinned, whisk in more sugar. IMPORTANT: Spread the glaze over the cake as soon as you remove it from the pan.

What’s the importance of the ‘IMPORTANT’, you may ask?! Well, if you wait too long (i.e. as long as I did) your glaze will be less of a light sheen and more of a heavy icing, as mine was…

…but then again, I’d never say no to an iced cake! 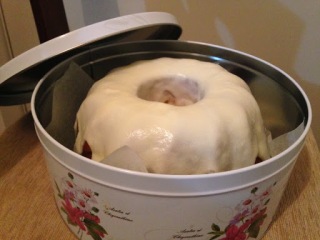 As you can see, I wanted to keep any icing mess contained so I lined a tin with baking paper and iced it in-situ.

Tea and cake, anyone?!


*[I generally use margarine in cakes because a) it’s cheaper, b) it can be dairy-free if you read the labels carefully, and b) it’s already softened, so you don’t have to kick yourself for forgetting to leave it out of the fridge for a day beforehand, like you would with butter. Lately I’ve been taken by Country Soft because they make a buttery spread with buttermilk in it that whips up to a beautiful light yellow when it’s creamed – just like butter! Also good as it comes in lite.]